Route 66 on DVD – The More Tod and Buz Zoom About in Their Corvette, They Become Either Small or Giants, Your Pick

Too many decades of television to limit it to a Top 10, with a tip of the hat to Dave. I suspect I'm the only one who has  The Range Rider and The Wire both on that Top 25 list, and could discuss at length exactly why.

In many interviews over the years, I have often been asked "What writers influenced you?"

I'm not comparing myself to these writers, just that they, and some others, spoke to me, and shaped the way I saw the world, and moved me with words. In some ways, I cannot imagine who I would have been if I hadn't experienced their work.

I was 15 when Route 66 came onto television screens, and while I loved 77 Sunset Strip, Route 66 had a profound impact on me.

I took my Dad's audio tape recorder and recorded episodes of both series.  This was during a time frame where there seemed no way to ever see this material again. Reruns were kept to a minimum.  There was no video tape.  You saw it once, and maybe you would never be able to experience it again.

I painstakingly played the audio tapes, stopping the tape and rewinding, again and again, and I typed the stories out as novels. The stories meant that much to me.

I couldn't bear to lose those stories forever.

What Stirling Silliphant taught me as a writer was that you could try every time out.  Every time you wrote a story, you could swing for the bleachers!  Every episode Silliphant seemed to bleed onto the page, to breathe with his characters, to tell a compelling story that could work on more than one level. 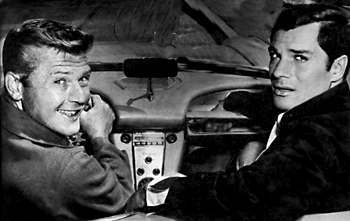 When I began writing a regular series, I often wondered how he managed to keep the telling of stories important, to not lose sight of why you came to be there in the first place.

It was my desire that I do the same thing with each comic I wrote, give it everything I had, and give the readers hopefully a comic that worked on more than one level.  I hoped for some readers that it wasn't just another comic read and thrown onto a pile.  I hoped each story would be unique unto itself.  I hoped if it was a series it would work by itself, but would enhance the whole, that a reader could go back and re-read the stories and find new meanings, and how events were developed right from the get-go.

I hoped some people who loved comics would know I cared each time out for the privilege of getting to tell stories and to be a part of comics.

I hoped some story-tellers might feel as I did about Stirling Silliphant, that the stories inspired them to tell their own stories in their individual voices.

I was always amazed how much blood Stirling put into his scripts. The poetry of his words stabbed right into my head. There are episodes of Route 66 (and Naked City) that have some of the best writing ever done for any series.

Route 66 marked more than one historic approach to the television medium, and you can see it in this collection that spans four years.

Tod and Buz had a cool car, yeah, but essentially they were working class guys, who had to earn a living if they were to keep on travelling.

Here's a little Stirling Silliphant from his script "Incident on a Bridge":

TOD:  We came to Cleveland last Thursday.  Over Central Ohio.  The flats below and around us.  Every kind of industry you can think of…all going full blast.  It made me feel small somehow…and I said so to Buz…. You know the more we travel around the…farther away the horizon looks…and the taller the buildings seem.  You'd think it'd be the other way around.

BUZ:  Just the opposite.  The more we travel around the bigger we get.  Sooner or later if we keep rolling like this, we'll be giants.  'Cause you gotta match the scene.

TOD:  I remember that remark especially.  Because we were about to meet a man who thought he was a giant, Olaf…and a real giant of another sort, Devovoy…I guess you could say for us…all this really started when we checked into the sand and gravel yard…we'd already signed in at the sand and gravel yard in Pittsburg for a three week swing. Seventy eight, thirty two and glad to get it.

Tod and Buz did not often wear suits.  They weren't police, they weren't lawyers, they had no authority, and Silliphant often makes it clear that they are two opposites who share a passion to live unconventional lives!

For seventy eight, thirty two and glad to get it.

Plus, Herbert B. Leonard, as mentioned, somehow got it into his head to film everything on location, inside and outside.  Sets were seldom used. If you were at a diner, or in a gas station, or in someone's home, you were in the real rooms, with views out the windows that leant a reality and ambiance it would be hard for CGI to convey. The only show to be more ambitious was I Spy, when Sheldon Leonard decided to film globally.

Silliphant pushed so hard as a writer; there are times I can't believe what he managed to achieve in a weekly series at that point in time.  It's important when reviewing the history of the medium as to when things got done.

It's the "When" critics often forget. To be the first to get things done in the entertainment industry means to stand your ground, and lose some of the fights, but keep on believing it was worth the effort. 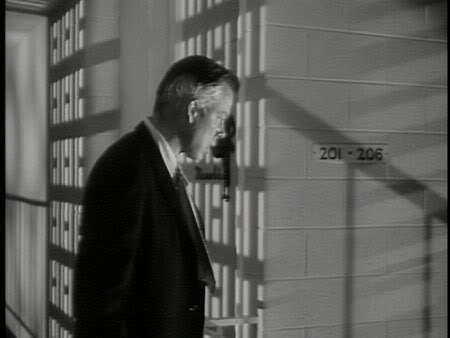 For when you begin the next story.

There's an episode called "Sheba", where Lee Marvin plays probably the most despicable character he ever portrays on film.  Marvin's repellent but charismatic character frames this woman, whom he nicknames Sheba, for a jail term, has her husband killed, turns her into an alcoholic, is there when she gets out of prison, and eventually sexually assaults her.

And when Tod and Buzz listen to her reveal all this terrible history, Silliphant captures her torment and self-destructive side, when Sheba confesses that the next time, despite all Marvin's character has done, she isn't sure she can resist him.

It's so human and emotionally devastating admission. Silliphant was always searching for the insides of a character, what made them feel, what gave them joy, what drew blood from them, what added to their lives and what took away from their lives.

Another episode that spoke fiercely to me was "Incident on a Bridge".  Anyone who can look on that love story and not be moved by it has a harder heart than I do.

Nehemiah Persoff as the Mad Monkey Man of Russian hill and Lois Smith as the mute Anna, whose only solace is one record she gets to play, are so vulnerable that it hurts.  Nehemiah's soliloquy to Anna as she hides under the boarding room steps has Silliphant writing such poetic, painful dialogue.

I have to let you read at least a few lines from Buz on buying Anna some records:

TOD:  Just then, watching Devovoy walk away, listening to Olavitch and Olaf, I felt something had torn loose, something no longer planned, something already out of control. Pulling as all towards some savage and unspeakable end.  I wonder what would have happened if Buz and I left right then…I wonder if it would've made any difference if we hadn't stayed…

What must have gone on in Devovoy's mind as he walked up the flats to Russian Hill…past St. Aldrich church ….and down St. Tickon Street to Olavitch's house…I guess we'll never know…People in the neighborhood who saw him that morning…going into pack…going in to get his few things in one suitcase…told the others later that he walked like a dead man….Was it at this moment when he knew he could never see Anna again if he left? Or was it later he decided to do what he finally did?

Only one thing was clear…Anna was terrified of him… the loneliness and desolation of her life was beyond belief…though she herself must've been unaware of just how lonely and desolate it really was…from six each morning until eight each night she cleaned and cooked and laundered and tendered house…with a father, a young brother, and whatever borders Olavitch managed to bring home/ She lived by the clock.  Seven days a week…Fifty two weeks a year…as far back as she could member…The women in the neighborhood asked, "What else should a woman expect?" I guess in her own way she never let herself think too much of anything else…Never dared to look at the world beyond Russian Hill. 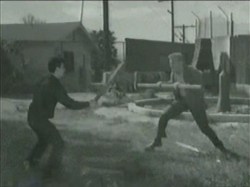 The episode "Most Vanquished, Most Victorious" (What a great title!) may seem quaint with its gang scenes by today's standards, but its core drama of learning who someone really is remains profoundly powerful. And the story of how some have to corrupt the individual spirit of creativity is still as relevant today as when Silliphant wrote it.

Silliphant once talked about winning the Oscar for Best Screenplay for In the Heat of the Night, but said there were episodes of Route 66 that he thought were much better.

And I've debated on occasion how critics often talk about the work of directors and actors who did so much television work, as if that work didn't count. Long before To Kill a Mockingbird, watch Robert Duvall in Route 66 as a drug addict in "Birdcage on my Foot", or especially Duvall's Naked City episodes, "A Hole in the City", "The On
e Marked Hot Gives Cold", and "Five Cranks for Winter…Ten Cranks for Spring". And then tell me how Duvall's career began with To Kill a Mockingbird.

It should be noted that the first set of episodes on these DVDs have apparently not been upgraded from their original printing from another company some years back.  There are two episodes that have some minutes cut.  The Sheba episode has a noisy sound-track. But by the middle of the first season, the episodes are fine by me.

And this is the first time the fourth season has been available on DVD.

Don McGregor is the writer of Killraven, Black Panther, Nathaniel Dusk and a slew of other classic comic books. Order a copy of The Variable Syndrome and other books and comics by Don from his website or his outstanding Detectives, Inc. at Amazon.

Route 66 on DVD – The More Tod and Buz Zoom About in Their Corvette, They Become Either Small or Giants, Your Pick

Too many decades of television to limit it to a Top 10, with a tip of the hat to Dave. I suspect I'm the only one who has The Range Rider and The Wire both on that Top 25 list, and could discuss at length exactly why.

In many interviews over the years, I have often been asked "What writers influenced you?"